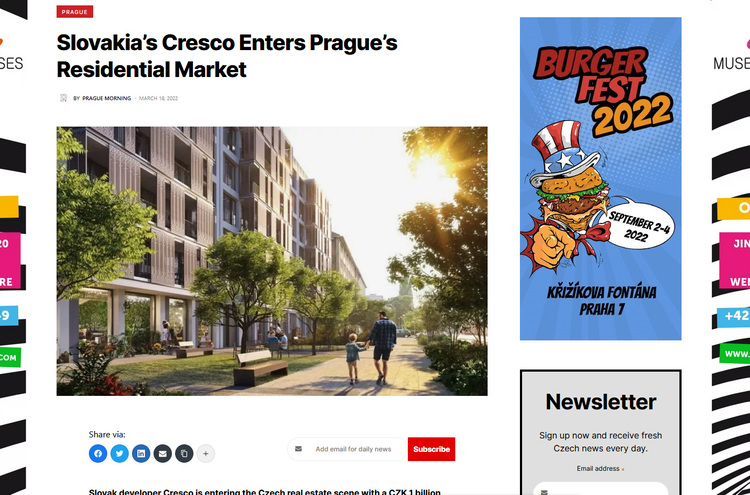 Slovak developer Cresco is entering the Czech real estate scene with a CZK 1 billion project for a 500-apartment building in Prague’s Holešovice, the company announced on the project’s website. And it says it already has other plans for further expansion in the Czech Republic.

Holešovice should have a major new development within a few years, namely the SO-HO apartment building, which Slovak developer Cresco Real Estate plans to build there for at least CZK 1 billion.

The first stage has already started. The completion is to be finished by the end of 2023.

In the first stage of the project, the former industrial building of Tesla Holešovice in V Háji Street will undergo reconstruction into an apartment block with 148 small flats.

The price of the smallest 1-bedroom flats, which are already on sale, starts at around CZK 5 million. The project also includes atypical 1.5+kk flats, duplexes and lofts. In the next two phases, the developer will build a new residential block on the perimeter of Dělnická, Jankovcova and Tusarova Streets according to the design of the Prague studio Qarta Architektura.

The original project of two office towers has transformed into a purely residential project with a commercial ground floor and a green courtyard accessible to the public. According to the developer’s statement on the project website, all phases of the SO-HO Rezidence project have already building permits.

According to E15.cz, the company is also in talks with potential tenants for commercial units on the ground floor of the building, targeting more shops and services with a local character. The average price per sqm of an apartment in the entire complex is between CZK 150,000 and CZK 160,000 per sqm, with loft housing hitting the CZK 200,000 per sqm mark.

“The total cost of the project is not completely certain yet. We are still selecting the contractors for the second and third phases. The financing of the project has doubled in price during the preparation. However, it is already certain that the price will reach billions,” the daily E15 quotes the director of Cresco’s Czech branch Aleš Svatona.

“The company’s management did not see any risk. The bet on the price growth of Prague apartments was clear,” said Jan Štembera, head of sales in the Czech Republic.

Cresco was founded in 1992. Most of their projects were built in Bratislava, such as III Věže or the residential area Slnečnice with 10,000 flats. Cresco has been preparing for expansion beyond the Slovak border for many years. They are now intensively looking for further opportunities throughout the Czech Republic and are also considering entering the market in neighbouring countries.